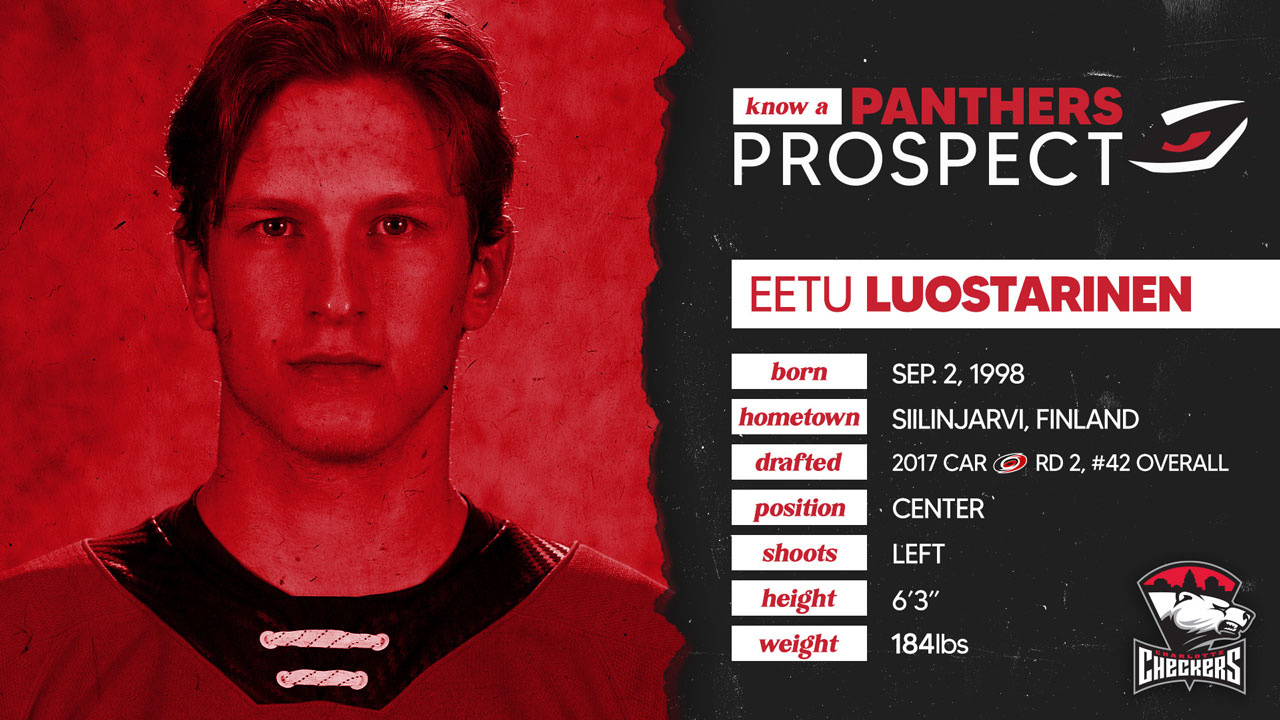 Now that we’re affiliated with the Florida Panthers, we’re going to spend the next several weeks introducing you to some of their prospects that could end up on the Checkers’ roster at some point. Now up: Eetu Luostarinen. Eetu Luostarinen is a 22-year-old center and former Checker who could coincidentally find himself back in Charlotte next season. Like the Checkers, he also changed affiliations from Carolina to Florida, though he did so in a February trade that saw the Panthers acquire him and three other players in exchange for Vincent Trocheck.

The Hurricanes’ second-round pick in 2017, Luostarinen played three seasons in the top division of his native Finland before spending all of last season in North America with Charlotte, Carolina and Springfield. He has represented Finland internationally several times, including a gold medal win at the 2019 World Championship.

An all-around center with size (6-foot-3, 194 pounds), Luostarinen contributes at both ends of the ice and in all situations.

Luostarinen was a reliable top-six center for the Checkers last season, scoring 25 points (8g, 17a) in 44 games. He also played his first eight NHL games with Carolina, recording one assist, before the Hurricanes traded him to Florida. He only had time to play in five games for the Panthers’ previous AHL affiliate in Springfield before the season ended prematurely in March, but he later accompanied the NHL club to the Toronto bubble for the Stanley Cup Playoffs as a reserve.

“He’s a two-way player with great skill that can make plays in traffic and around the net. He’s a very, very smart hockey player with a hockey IQ that is elite. I’m looking forward to getting to know him a little bit better as we move forward, but he’s got a lot of talent. Getting traded in your first year is not always easy, but when you go through those things they become life experiences and you get better from that.”

Back with his previous Finnish club KalPa, where he had been since the youth level prior to last season, Luostarinen is enjoying a strong start to the 2020-21 campaign. He ranks second on the team with 15 points (5g, 10a) in 17 games.

He could potentially be one of five Finnish forwards on next season’s Checkers team. Aleksi Heponiemi and Juho Lammikko are already under two-way contracts, while Henrik Borgstrom and Aleski Saarela are still restricted free agents.